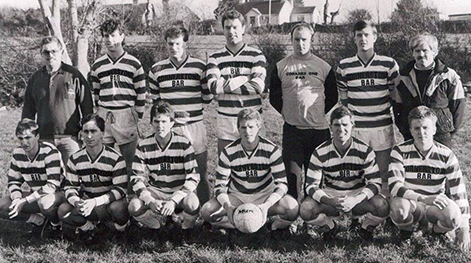 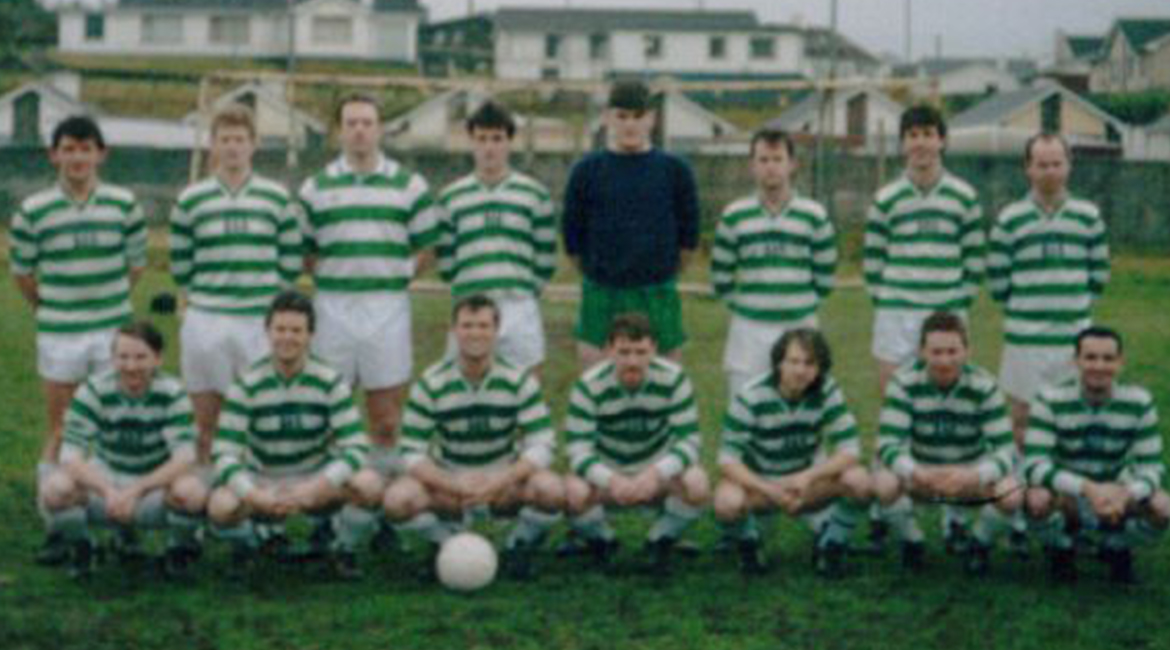 A Bit Of History

To understand how Ennistymon Celtic FC came about in 1987 it is of great importance to go back two decades prior to view the sporting landscape in the North Clare area. The game of Association Football was very much a minority sport and was mainly played on an ad-hoc basis by groups of lads gathering ,picking two teams and using jumpers for goalposts. This was certainly the case in Ennistymon right through the 70s and 80s with places like the Monastery Yard, The Scout hall, the Mart and the Convent field being regular venues. In 1971 Ennistymon United was formed, sponsored by the local dry cleaners “Amitaf” which was owned by PJ O’Dwyer & family. The club competed in the Clare District Soccer League until becoming disbanded in 1974.The Ennistymon Family Festivals were ran annually throughout the 70s and in to the early 80s and the five-a-side tournaments were always a major highlight of these festivals. It attracted lots of teams from established Clare League clubs like Ennis Albion, Hermitage, Turnpike and Corofin.

This gave a great incentive to local guys to form teams and take on these much vaunted Clare league outfits and more often than not the local teams emerged victorious in the tournaments. One man, Greig Mullane Snr. deserves a special mention for being front & center with regard to most footballing activities taking place in the 70s and 80s in Ennistymon. He was a fine player in his day and was always a great organizer and referee when it came to making sure that the game was played in a proper and fair way. The football community in Ennistymon were very lucky to have him throughout this period. The Ennistymon Family festivals ceased to be in the mid 80s and this certainly left a void with regard to playing competitive football. There was some Inter firm football competitions which catered for players who worked for firms. This led to some Ennistymon players signing up and playing for clubs like Corofin Harps and Lifford A.F.C in Ennis which would guarantee them a full season of the sport. The arrival of Jack Charlton in 1986 as manager of the national team was about to change everything as the whole nation (Jackie’s Army) got behind the Boys In Green. The national team were on the cusp of qualifying for their first major tournament at Euro ’88 and local soccer players and enthusiast were about to finally get their act together and set up Ennistymon Celtic FC.

The FAI Junior Cup was the blue riband national cup competition and the local side overcame Turnpike Rovers from Ennis in a penalty shoot-out in Lahinch to win the Clare area final. There was a crowd of several hundred at this final and the game is well remembered to this day .A great celebration ensued at the Cornerstone after this victory. This win meant the team progressed to meet the winners of the Desmond area ( Newcastle West) to progress to the last eight of the competition. The Newcastle West first team played in the League Of Ireland at the time and all the talk among the Celtic faithful on the journey to the game was that it was going to be great playing at Ballygowan Park. When the travelling party arrived at the venue they were directed to another pitch which was a mud bath. Undeterred Celtic were victorious by 2 nil in a real muck and bullets battle. Legend has it that a couple of the travelling Celtic fans missed the game as they were detained by the local constabulary for over celebrating before kick-off. The team returned to Lahinch later that evening and celebrated this victory late in to the night at The Cornerstone.

The Team would now face Temple Utd from Cork city at home in Lahinch for place in the semi-finals. Temple had a couple of Junior Irish internationals in their ranks and were one of the favourites to win the FAI junior cup outright. The day of the game saw a gale force wind blowing straight towards the Castle Course end of the pitch and Temple won the game with a free kick assisted by this fierce gale mid-way through the second half. It had been a great journey for Celtic, a Clare League 2nd Division team, and the game was followed by a lively night back at the Cornerstone which included the large visiting Temple Utd crew who made the journey up from Cork City.

Celtic rounded off a great season by being awarded the Clare League Fair play trophy which recognized that we were not a dirty side but we had our moments for sure.( No names ) Season 1989-90 proved to be another successful league campaign with Celtic again going unbeaten throughout the season and winning the title in style. Their nearest challengers were Kilmaley Utd and their two encounters in the league proved to be very lively with Celtic winning both games. The team got to the 1/4 final of the Cheers Cup losing to Newtown Utd by 3-2. Good cup runs in Clare proved to be elusive for Celtic due mainly to drawing top premier sides and losing out usually by a goal in close games. The team were now a Premier division side and the step up in standard was going to be a big test for the team.

The step up in standard did prove to be too much for Celtic in their first season in the top flight. The team struggled to get their best side out for the early games in the campaign and while the team put a run of victories together in the middle of the season it was not enough to keep them up. The core of the team were all involved with GAA teams and if there was a clash of fixtures the football team lost out on these players. This was very evident in the first two months and the last two months of the season. This pattern of events would be replicated over the next five seasons with Celtic yo-yoing between the Premier and first divisons. The team won the first division twice over the last five seasons of its existence and also fielded a youth team for the first time in 1991-92 and these were certainly notable highlights. The combination of key original players/personnel leaving the club, the constant battle to get commitment from younger players and certainly the fact that the pool of players available were traditionally GAA players first and foremost eventually wore the club down and it was disbanded in 1997.

Ennistymon Celtic was of its time and it was more than just a football club. The friendships formed by teammates and supporters lives on to this day as was evident at the great reunion night held recently at the Cornerstone, where some great “Glory Days” were recalled. The club was definitely the catalyst and inspiration for other North Clare Clubs like Burren Utd and Moher Celtic being formed. It also was the link with Ennistymon Town being formed in 2004 which eventually became the current Sporting Ennistymon Club .Long may the great game of Asssociation Football continue to be played in the Ennistymon and North Clare area.

Photos from the past & Present 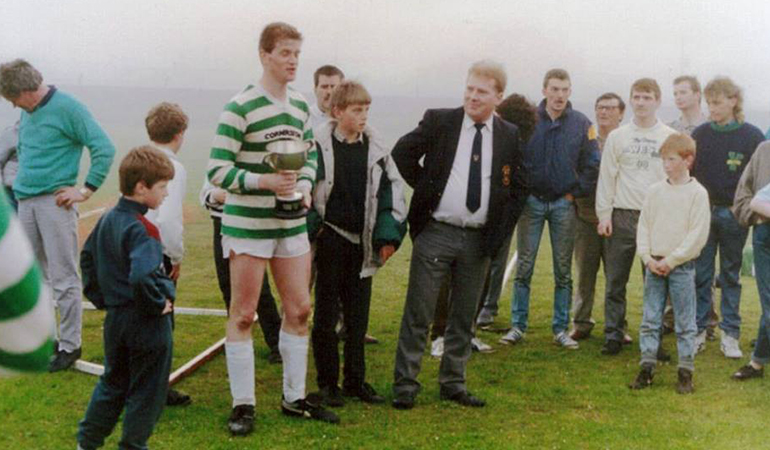 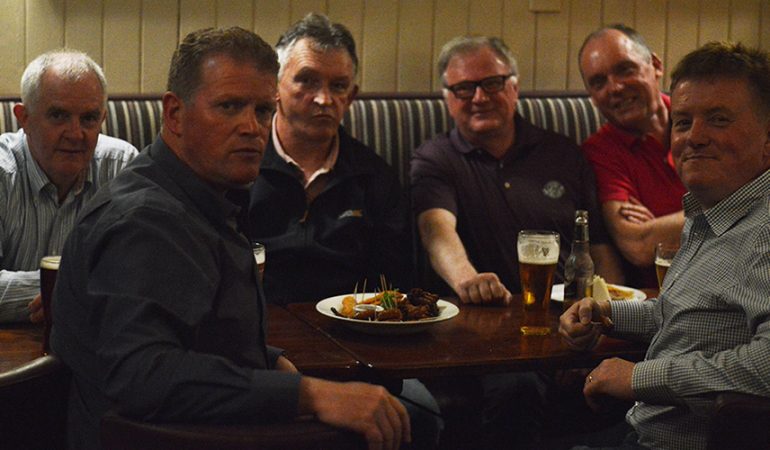 Some of the Players at the 30th Reunion 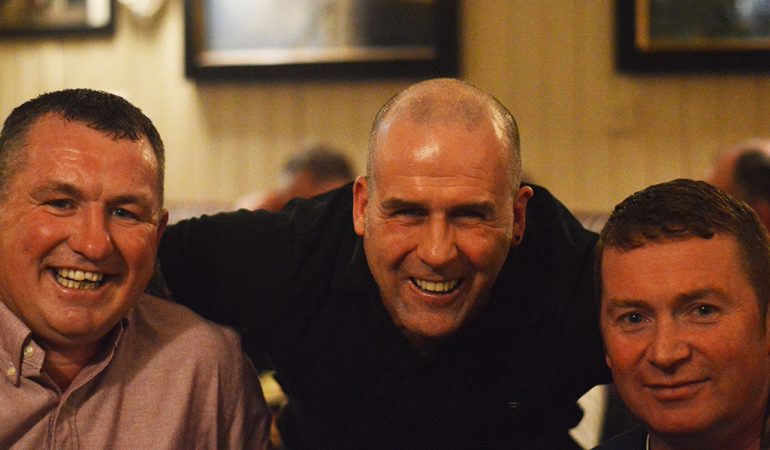 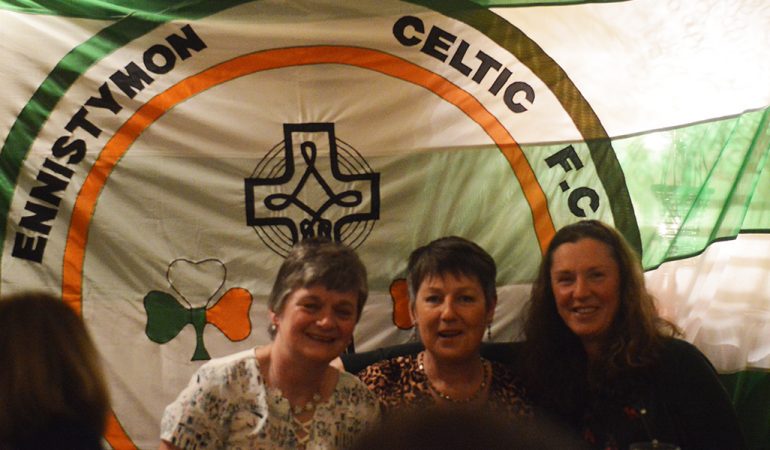 Some of the WAGS