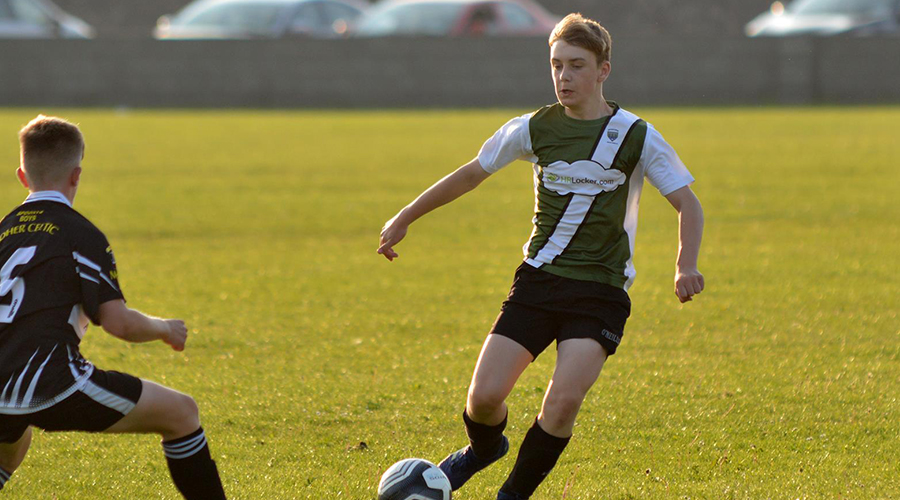 Sporting Ennistymon qualified to the Quarter Final of the U14 Cup with a 4-2 victory away to Tulla Utd on Thursday August 30th. Tulla Utd began strongly and scored an early goal in the fifth minute to put them ahead 1-0. Sporting were back on level terms after 15 minutes with Mikolay Augustyn hitting a low drive to the back of the net to make it 1-1. Just before the break Eanna Haran was taken down in the box after a great attack from midfield. Mikolay slotted home from the spot to make it 2-1.

Tulla came back strongly in the second half but were unable to find a way through the Sporting defence controlled by Patrick Kivelhan, Daithi Fitzgerald, Sean Singleton and Oisin McDonagh. Then Tulla were caught on the break, Eoin Breen passed out wide to TJ Crowley who put in a superb cross which was met by Augustyn to give Sporting a 3-1 lead and his hat-trick. Tulla never gave up and pulled a goal back to make it 3-2. Both team’s fought hard with end to end football. Then in the dying minutes of the game Tulla were caught on the break again by Sean McMahon, who ended being taken down in the box. Sean stepped up and scored the resulting penalty to make it a 4-2.