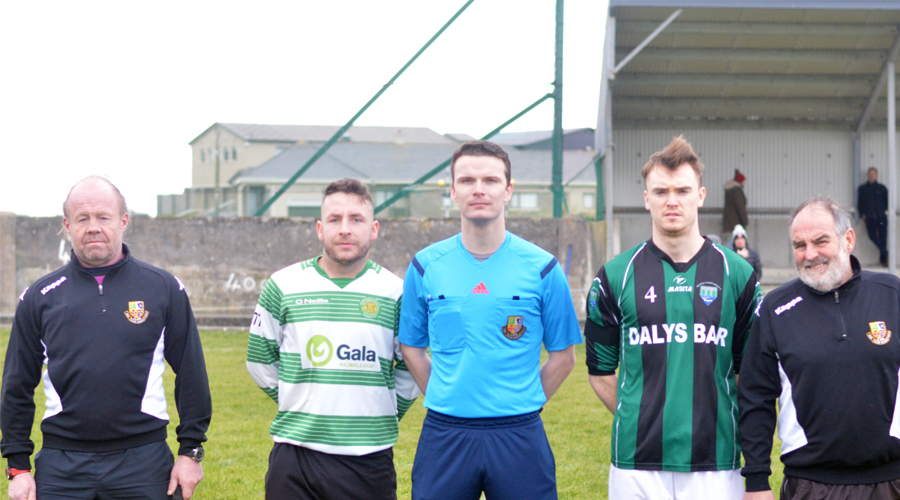 In front of a very large crowd, Sporting Ennistymon welcomed Kilmallock Utd of the Limerick Premier Division to Lahinch in this last 16 tie of the Munster Junior Cup. This was Sporting’s third foray into the last 16 of Munster in the past 5 years, losing out to Geraldines and Pike Rovers in 2014 and 2018 respectively.

During a frantic opening few minutes, chances fell to both teams to open the scoring. The visitors had two shots from Paul Doona, the first went wide while he should have hit the target with his second but went about a foot over the bar. Sporting’s Sean McConigley managed a left footed effort that was saved by Robbie Egan in the Kilmallock goal.

When the visitors arrived, the sun beamed down from a clear blue cloudless sky, but within the hour conditions changed to dark, wet and windy. The visitors soon found how the wild Atlantic conditions could be difficult to deal with as Sporting had the aid of the strong breeze in the first half. In the 4th minute Sean McConigley ran onto a long ball that bounced over the Kilmallock defence, his lobbed effort from just inside the box over Egan went inches wide of the upright. A few minutes later, the ever dangerous Michael Duffy found space after beating 3 Kilmallock players down the right finally unleashing a left footed effort that again went the wrong side of the upright.

Just before the half hour mark, Sporting were awarded a free kick after Shane Kearney was fouled. The resulting free kick was floated into the box and it was Jamesy McConigley who rose highest to head narrowly wide. Sporting were to rue their missed chances when Jack O’Dea was harshly adjudged to have fouled Kilmallock’s number 8, even though the Sporting defender got a clean contact on the ball before the striker. Paul Doona stepped up and placed it just out of the reach of young goalkeeper, Connor Gallagher. Kilmallock played some tidy football out from the back and used the wings in their attacks into the Sporting half of the pitch but were superbly dealt with by Joe Gallagher and Ciaran Monaghan on either side. So 1 nil at the break and a big second half was needed from Sporting.

Sporting consistently broke through Killmallock’s defence. First through Duffy, who again after great work down the right wing fired a low drive into the side netting. Rowan Danagher ran on to a through ball from Eoin Marrinan only to see the ball bounce unkindly as he was about to shoot. Sporting had a few penalty appeals of their own, first when Sean McConigley appeared to be clipped inside the box and then brother Cathal went down in an off the ball incident. The final minutes included chances cleared off the line, controversial decisions as well as a brilliant reaction save from Gallagher and timely interception by Tiernan Hogan.

In added time Sporting were awarded a free-kick after Cathal McConigley was kicked while shielding the ball. The result was a low driven shot to Rob Egans left, who got down well to palm it away. A goal mouth scramble ensued with Michael Leigh, who had now moved into midfield after the introduction of Paudie Kelly, desperately unlucky not to get his shot off with the ball eventually ending up in Egans hands.

That was to be the end of the 90 minutes and Sporting’s campaign in this years Munster Junior Cup. Sporting will take great heart out of this display and are especially grateful to the large attendance that turned out to possibly the biggest game in Lahinch in recent years